Looking Within to See Beyond 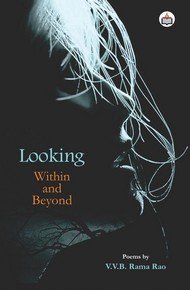 Looking Within and Beyond by V. V. B. Rama Rao is certainly a collection of poems that will make the readers look within themselves and beyond the world around them. With the poems presenting a panorama of expressions, one is acutely conscious of the poet’s emotions in response to the world around him and, many a time, his response to himself.


The first poem, Beauty and the Feast, is full of devotion to the Supreme where the poet concludes, “What is saundarya if it doesn’t bless one with bhakti!” In The Seer’s Eye, where the Seer says that vultures “with crooked beaks” will be “transformed into white doves”, the poet is confidently optimistic. The lines “Swishing under walkers’ morning feet/Searing freezing breeze/Sieved through flannel sleeves” are testimonies to the poet’s sensitive perception which makes him see the subtlest of the subtle things around him.

Down-to-Earth is a medley of emotions, but this reader’s mind was filled with a lingering ache, which might resonate in every reader’s heart, by the lines thrown so casually amidst the array of emotions:

Many times a day
See I my mother, unexpectedly, tired and wan
In a milling crowd on the street, eyes downcast
Treading slowly, a balancing act: a fall may spell ruin
Reaching the mill in time, a feat, a miracle, everyday
Sometimes there is a detached observation of people as in the poem, Look Within:
A mask is not the face
We see masks, only masks
Not always the faces.
A face can wear many a mask.
....
Some have only masks – no face at all.

The poem, Morbidity, is full of empathy where the poet talks of the patient whose “day breaks without dawn” and “night falls without twilight or dusk,” whose “world shrinks to fourteen by fourteen” and “the window opens when the weather condescends”.
The poet’s in-depth understanding of the scriptures is reflected in poems such as Being. He throws light on how “experience is transient” and “realization everlasting”. He emphasises the need to reconcile with yourself, “never falling out with ‘that’” and “making peace with yourself”. He is unwavering in his conviction when he ends the poem with, “I’d be at peace with myself”.

Asking for the moon (figuratively or otherwise) is the ultimate one could ask for. But the poet surprises you when he shakes even the moon from its pedestal when he writes, “I don’t ask for the moon/For, who knows, when mountains move/She might come down!” in the poem Asking for the Moon. And then he makes you sit up and face ground reality – “The Mahatma has to come again/For another righteous hungry silence/For a poor man anger is suicidal/In people’s rule, not all people share the pinch/Not all have the needed punch” in Fighting Back.

“For another righteous hungry silence” – this is a line that has packed into it not only the great phenomenon, the Mahatma, but also the essence of a whole era of India’s struggle for independence. The poet can be quite sarcastic too as he says “Three jeers for Demonocracy”. In the poem “What I Believe”, the poet is, again, a seeker.
The leela is not that of the instrument
It is the wielder – not always believed
That does it.
Do you know the wielder, I don’t know.

As one reads through the poems in Looking Within and Beyond, one feels one is slowly but steadily guided from the ‘basic and material’ to the ‘higher and spiritual’ realms. Hurry up, Please, It’s Time resounds with a kind of calm resignation.

When conscience spews disgust at yourself
When looking back becomes painful
When it dawns that the clock cannot be set back
When no amends are possible
When you want to die and you cannot.
When you don’t wish to live but pulling on is imperative
When you trudge alone, along stormy, murky rank-smelling
paths.
Realize the past cannot be brushed away.

Bedside seems to be an autobiographical poem. A Sigh and Relief is thought provoking – None has power all along/Waves that surge retreat too/Living goes on/Nothing remains. Memory seems to be a very casual poem until it concludes.

It flashes for no reason at all
A whiff of a thing forgotten long ago
From the distant insignificant past
...
A memory may not have any purpose.

The poet again and again, through his lines, compels you to think. And to what end?
Acquisition of Jnana is the goal
Think, think, think!
– Till mundane things fade
Then may emanate radiance
Slowly, slowly, steadily.

The above are the lines from the poem Coming of Age. The poet is sometimes cynical as in Strategic?! (“Hearts are in great need/But not a seller yet/Strategies can be worked out in a jiffy/God save the intending seller”) and sometimes sarcastic, or even bitter, as in In a Dust Haze (“Contented citizenry make the sky clear and blue/Endure – swallow the bitter – show sweetness/That’s all we can do and should do – to stay alive.”)

The poet’s command of various languages is clear in his style of writing. He uses apt phrases in different languages to add flavour to the subjects his poems deal with. Let me conclude with two of his poems that reveal the essence of poetry – his poetry. While Kittening and Penning is about the ecstatic high in the creation of poetry, Poetic Sensibility is about the sheer experience of enjoying poetry.

Imagination, ever extant and breathing
Needs a spur – call it a spark divine
An inspiration – frenzy too,
Orgasmic feeling of satiety,
The radiance of a rapturous thought. (Kittening and Penning)

Not just – either sweet or savory
Never for munching, gulping or gobbling
Never is that to be hurried
It’s like a kid’s licking a lozenge to stay long
Nectar on the sweet-heart’s lips (Poetic Sensibility)

V. V. B. Rama Rao’s collection of poems is exactly like that lozenge the kid licks and rolls in his mouth ever reluctant to swallow, for, one wouldn’t want to hurry through its sweet and savoury flavours.

Email ThisBlogThis!Share to TwitterShare to FacebookShare to Pinterest
Labels: Reviews

I am Sujatha Warrier. According to my resume, I am a writer, editor, researcher and translator. When I am at work, if not writing, I am reading. When I am not at work, if not reading, I am trying to write. In other words, I spend most of my waking hours gorging on words. So, as the blog title suggests, I am kind of overdosing on words. This blog is just a natural outcome of
this overdose - a spill-out. If, as a reader, you happen to chance upon this, you are free to glance at it, go through it or ignore it. Your comments, if any, are welcome.