Across the raging rapids 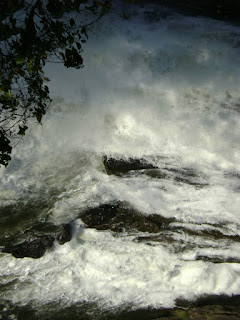 [Contd. from Passing or trespassing?]

The dawn broke over the serene valley and we woke to the exhilarating rhythm of the falling waters. We looked eagerly forward to another day of bird watching and making several new jungle friends of the winged variety – bulbuls, Magpie Robins, hawks, eagles and many, many more! I was particularly enchanted by the little drops of sunlight caught amidst the clusters of leaves, and as I watched – whoa – they spread wings and flew away! They were tiny sunbirds! The bright yellow beak of the male hornbill, the shining yellow plumage of the Eurasian Golden Oriole, the flame-backed woodpecker – I had never before seen such a pleasant medley of different yellow hues! And then there was the haphazard array of the yellow flowers of silk cotton! 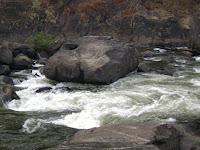 Baiju had promised us some adventure earlier in the morning and as promised, he took us trekking over the treacherous rocks on the riverside near Ittiani. We passed several scenic off-beat locales that had flitted across the silver screen in a plethora of Indian films. As we walked, precariously finding our feet, we saw that the raging rapids, over time, had moulded the rocks into different shapes. There were pits created on the rock floor and walls that were large enough to hold two or three humans at a time. No wonder bodies that fell into the falls were oftentimes not discovered even days later! Some of these rocks were in rustic shades of pink, another wonderful handiwork of nature.

A delightful buffet breakfast later, we were still craving for more of nature, and having kept the best for the last, we set out on the last leg of this rainforest experience – a steep climb down towards the waterfall through the woodland behind the resort. On our way, we discovered little sunbird nests and wild mushrooms in vibrant hues. We walked through thick shrubs of snake plant, known colloquially as mother-in-law’s tongue due to its extraordinary length and sharp edges, which is, it seems, a healing plant for burns. 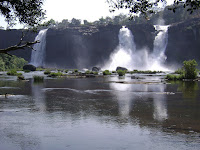 The climb down brought us to a stretch of the river from where we enjoyed a beautiful uninterrupted view of the falls. Here the river was neither deep nor shallow but exciting enough to wade through gingerly, watching one’s step across the rocky bottom of the river. Through the water, across the rocks, past the bamboo thickets that were infamous for King Cobras, we reached so close to the waterfall that we could actually feel the spray on our faces!

Surely, there couldn’t have been a better culmination for our weekend holiday experience – an experience of nature in all its exciting forms – forests with its exotic flora and fauna, rivers, rocks, and waterfalls! One regret remains though. Baiju had gathered and filled all of his cargo pockets with mango ginger roots for me to take back home. We forgot all about them and they remained with him as we bid goodbye after the best weekend in my life ever.

[The Weekend Holiday concludes. The series starts with The journey begins.] 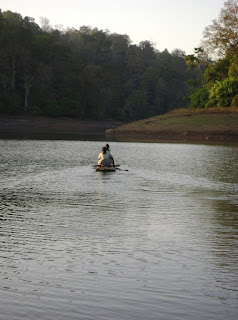 [Contd. from A jeep ride into the jungle]

The expedition took us to a lake in the forest, which was more like the confluence of three rivers, appropriately called Mukkampuzha (which roughly translates to ‘three rivers’). Intense jungle lies just across the water and one could spot, if one was just lucky enough and the timing just correct, wild animals walking down to the edge of the water for their 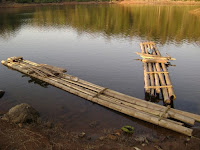 sundowners. To reach this place one had to pass (or trespass?) colonies of tribal people who were friendly enough to take you for a gentle spin on the water on perhaps the narrowest raft that was ever made - just three or four bamboos in width so that cool water splashed on your feet as you rowed across the still waters. Captivating was the play of evening colours on the quiet waves made by the raft on the water surface.

Towards early evening, as the jungle slowly disappeared under a blanket of darkness and we were just a few kilometres away from Anakkayam, Baiju – by now our friend and confidant regaling to us many, many experiences of the forests – made an astounding observation that he could smell an elephant nearby! He was right of course. A pachyderm was sauntering majestically on his way back from the river, past the bamboo clusters, after a refreshing splash in the river at the end of a warm, tiring day. 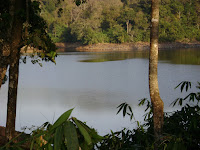 Incidentally, Anakkayam means ‘elephant pit’ referring to the fathomless depths of a lake which can drown even elephants. Trained eyes and ears, like those of Baiju, could pick out herds of deer that might be crossing the roads just a few feet ahead of you and strolling casually into the jungle. They can also foresee a wild cat on the prowl for an unsuspecting sambhar!

As the evening wore on and our vision got accustomed to the surrounding darkness, we discovered green, emerald-like sparkles among the leaves, across the road, and even far ahead amidst the thick woods. They were the eyes of leopard cats surveying us, perhaps cautiously questioning the intentions of our visit!

After a five-hour safari through the forest, we returned to the Rainforest Resort for a refreshing bath. The room was spacious and the décor reflected nature in its colours as well as in the materials used. The dinner was candlelit and of course there was the music of the waterfall in the background. It was a long happening day and we reluctantly fell asleep.

[Contd. at Across the raging rapids]
Posted by SW at 02:02 No comments:

A jeep ride into the jungle 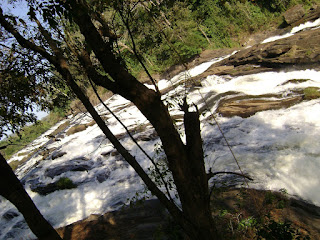 [Contd. from The journey begins...]

After a sumptuous lunch, we were just in time for a jungle safari in an open jeep with the official guide of the resort, Baiju, who was a local and knew the jungle like the back of his hand. As we learnt a few hours into the afternoon, he knew every tribal that we chanced upon on our safari by name and, as it turned out, he could not only converse with the tribals in their own sing-song dialect, he could also make some sense out of the twitters and chirps of the birds and the grunts and groans of the animals!

Off and on, we stopped the jeep and wandered on foot. Baiju pointed out to us many species of exotic flora – the exciting herbs that the nature here is blessed with! A small blade of lemon grass that I casually plucked, kept the air around me unbelievably fresh and pleasantly fragrant through the entire journey! 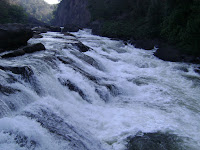 About 5 km higher up from the resort, we reached Vazhachal – a part of the same river and a smaller waterfall. Here, I found the entire river mass languishing in such careless abandon that I felt the country girl who welcomed us into the forest earlier was now more like a young voluptuous woman captivating in her seductiveness! The vegetation around this area is full of large sturdy trees. There is a man-made garden here that is maintained for growing medicinal herbs.

During this excursion, we came across many jungle fowls trotting elegantly by the side of the

road or even crossing them oblivious to the presence of tourists let alone being fearful of them! Hornbills were also found, engrossed in their intricate architecture, busy building their nests. Baiju revealed a disturbing fact as regards the hornbills – the global warming can become detrimental for the survival of this species! It seems these birds were found in pairs even in the month of February, which means they had not mated yet, though it was well past their mating season. This shocking fact is true for several animals of the jungle as well!

Huge dark squirrels, the malayannans or the Malabar Giant Squirrels, were found swinging playfully by their tails on branches of trees. The ones we saw swinging on the trees farther away in the woods were not really squirrels though, as we realised thanks to Baiju’s informatively profuse commentary – they were black monkeys or Nilgiri Langurs. The hooting calls of these monkeys could be heard clearly from amongst the trees as they were calling out to other members of their species. The langur-like hoots that you hear could also be bird calls by the wood pigeons interacting with their family!

[Contd. as Passing or trespassing?] 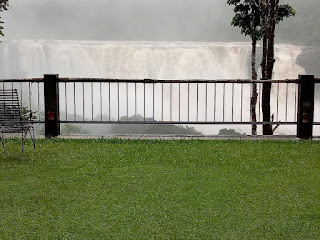 A pair of jeans and a couple of shirts for each and that was about all we needed for a weekend holiday in the forest! We were packed and ready to set out for the Rainforests of Athirappally. The location is just a comfortable drive from – not more than an hour and a half from the city. At 78 km from the most happening metro down south – Kochi – and 30 km from the bustling town of Chalakkudy, the place seemed to be too close to the rat-race civilization for us to actually expect something out of this world. As it turned out, we couldn’t have been more wrong really! 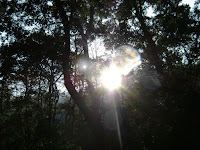 As we deviated eastward from Chalakkudy and gradually left the town, the traffic, the dust and the noise behind us, we could actually sense the world changing around us. We could hear a peaceful silence in the environment and smell a clean freshness in the air. And the views were so pleasantly distracting that the chatter in the car reduced to an excited hush as we gave in to the surrounding ambience.

We drove past unending stretches of oil palm plantations on the right, their cool shade tempting us to stop the car and take a stroll. On the left, there were hills plentifully covered by trees, their leaves reflecting shades of green and even splashes of yellow and brown thanks to the time of the year and the sweeping rays of the sun. Sometimes climbing up and at times dipping down like a casual stroke from a master painter’s brush, the road ahead of us twisted and turned around the dark groves on the right and the light green and brown hills on the left. 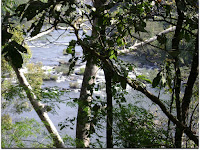 Further ahead, the palm groves gave way to a gurgling stream that had come prancing all the way down from Athirappally Waterfalls through the wilds, like a country belle, to catch the unsuspecting tourist unawares! Here, the hills on the left were more densely green, and we realised that we were moving closer to the forests.

Rainforest Resort nestled among the trees on the valley of a hill, facing the famous Waterfalls of Athirappally – the Niagara of Kerala. The restaurant, the pool, the room, the balcony and even the bed faced the waterfall. The surging waterfall made an enchanting backdrop whether you were having your lunch in the restaurant, or taking a dip in the most inviting pool that merged easily with the surrounding nature, or just relaxing in your room. You go to bed with the music of the falls singing a lullaby in your ears and you wake up to the most beautiful sight of the waterfall pouring itself almost into the backyard of the resort!