And the world came together in isolation -

From space the sky discovered civilization

And suddenly, our hands and breaths became the enemy

The Black Swan has glided in for a landing

We are at the mercy of a one-eyed caged bird

The beast is born but we can't know its impenetrable meaning

The air remains open, from song to terror

In what we later called the year of the Never Was

There's something missing on our streets

Our cauldron of time is nearly empty.

The above is an extract from an amazing creative initiative by Muse-Pie Press. 220 poets, who have been featured by them in their journals over the years, from 16 countries, contributed one-line poems, which the publisher, R. G. Rader, put together to craft 'a community poem'. There's an audio of the poem too. You can read as you listen to the whole poem here.

Moon so showers light
on the desert sands, the night
stays dark, and sands white.
[As published on https://spillwords.com/white-desert/]
Posted by SW at 04:32 2 comments: 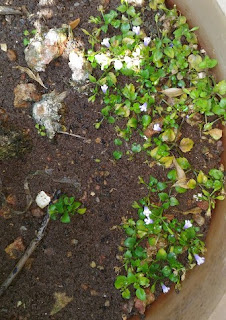 The unsolved mystery
in nature's history
is how wee blooms can be
in their infinity.