I could see the light
in the night, but not the way
and I went astray.

[This ekphrastic haiku was first published in Spillwords.com. The photograph was clicked by Bharati Varrier somewhere on the streets of Goa.]
Posted by SW at 00:52 2 comments:

Email ThisBlogThis!Share to TwitterShare to FacebookShare to Pinterest
Labels: Ekphrasis 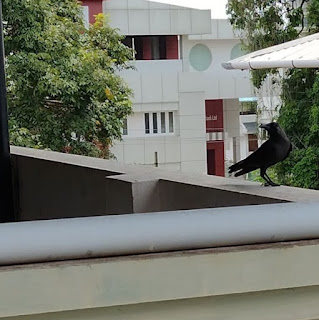 The crow hangs around the eaves today. Just as he had done the last morning. Yesterday he had slipped his beak into the rain gutter to take a sip of the previous night’s rain. Today he’s prancing along the trough to see if there’s any water – here, there or just around the corner. Well, no. Today is not his lucky day.

He flew in to this neighbourhood just a few days ago. It's a kind of homecoming. He had flown away from here way back when the pigeons had taken over these roofs. Strangely, the pigeons are nowhere in sight these days.

The crow wakes up from his reverie. He slants his gaze into the eaves trough once again. Could there be some drops caught at the corner? Or near the spout? Just enough so he could throw in the much-fabled pebbles? Then the water might rise a bit. It just might! But, no, there’s not even a drop. For, it had not rained last night.

Strange are the seasons nowadays. They used to span the year. Now they come and go as they please, every day. The rain was pelting the roof just the other night. And today the entire trough is dried up. Now where can he find some water to wet his throat? Wherever the pigeons find it, perhaps. Where are the pigeons, by the way?

Fall was yesterday
Summer had its way last night
It might rain tonight.

The Room Next to My Room

The room next to my room

is a wee too perfect.

everything well in place.

No clothes are in disarray

no bags half unpacked

Wardrobes are a surprise,

all in perfect order,

curtains are quite drawn,

The gadgets are amiss

and their crazy complexity

a network on their own,

a tangled web of sorts.

The room next to my room

that grew their wings and left. 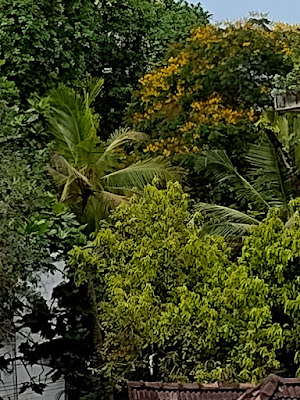 The sun slowly sinks
and the night falls at ease,
still the sunshine clings
to the golden rain trees.

[This poem is an excerpt from the collection of poems, "Fireflies".]

The journey is long and the baggage is heavy. One finds it difficult to lug around. Yet one's reluctant to put it down for good.

from place to place,

from here and there,

as I pick it up

as I put it down,

the road speeds on

slipping off my feet

as I tote around