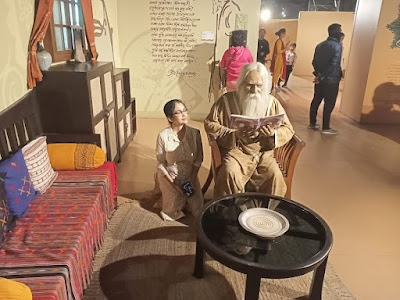 My visit to the Wax Museum in Kolkata brought back to me the memory of a day I had spent narrating poems to my (poet) father. This was just over a couple of months before he passed away. Age had impaired his vision, so it was a strain for him to read. Therefore, I had these long and delightful sessions of reading and discussing poetry with him. He had this amazing ability to listen to poem after poem for long hours at a stretch. And he would respond to even the subtlest of nuances in every poem. Rarely, he would ask me to stop reading and we would discuss things unrelated to poetry. After a short interlude, he would ask me to resume reading.

At the end of several hours of reading, my father would be thoroughly drained from listening, and my throat would be painfully parched from reciting. However, both of us would be elated in a way only poetry could make one feel elated.

My visit to the Wax Museum was, by the way, happenstance. Especially when I didn’t know a wax museum existed in Kolkata (Newtown). Surprisingly, most of the people I met in Kolkata – all of whom belong to the city – have not been to the museum.

On this particular day, he had asked me to read out the entire series of my (forthcoming) collection of poems, The Eternal Garden. Writing those poems was in itself a stroke of serendipity. As though they had been waiting to be written by me, they flowed out all on their own. Added to that was the instant connection Achhan had with those poems. All in all, that would always be counted as a special day in my life. Those moments can never be re-lived – not even if Achhan were not to pass on, not even if I were to write another series of poems. That experience can never be revived – not even if I were to put back the clock. It’s like a one-time password. There you have it! Live it or leave it.

After the reading session, my father said the collection was one of my best ever and the concept Tagorean. With all humility, I accept this as inspiring words of encouragement from a father to his daughter, and a generous blessing from an accomplished poet to a still aspiring one.

An excerpt from the collection, The Eternal Garden:

I lose
and
rediscover myself
in you.
At a loss again,
I wonder
where you begin
and I end?