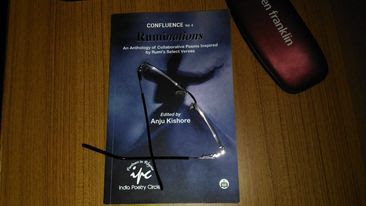 In a publishing scenario where there is a constant debate whether poetry would ‘sell’ or not, here is a group of poets who have come together to talk, think, discuss and write poetry every day on chosen themes, triggered by a new prompt every week. In this way, they continuously delve into, discover and dabble in new experiences in poetry. What’s more, they publish the collections. And what’s even more interesting about the anthologies is that they are not different poems written by different poets. Each poem in the collection is written collectively by different poets. “Ruminations” is one such collection of poems. It is a collection of poetic ponderings on love – love of the absolute kind. And this coterie of poets call themselves the India Poetry Circle. Founded by Jairam Seshadri, who is also its curator, IPC is a group of professionals in various fields, strongly connected by their passion for literature, especially poetry. “Ruminations” is the fourth in the Confluence series of poetry collections brought out by IPC under the inspiring leadership and guidance of Seshadri. A professional accountant and poet, Seshadri has a collection of poems and another of essays to his credit.

Creative collaboration is an exciting adventure, as the end product – the final work of art – is always a surprise for the collaborators.  It’s this element of surprise that makes the creative process exciting. And “Ruminations” is a treasure trove of beautiful poetry, edited by Anju Kishore who is a poet and editor, and a former cost accountant. The poems are based on the verses of the 13th century Perisan poet and Sufi mystic, Rumi. Anju has done a wonderful job of interweaving the verses with poetic narratives, which render the collection unique and enhance the experience of the readers. The anthology, or the Confluence as it’s called, stands apart from all other anthologies in that it does not reveal which poet wrote which verse. The contributing poets’ details are given in the end pages of the book, and that too in verse format. However, their names are not mentioned along with their verses. This suits the concept of this poetic exercise, which is, as this writer perceives it, losing your identity to become one with the larger whole, or rather, losing your separate identities in the larger oneness. In that sense, ‘Confluence’ is a befitting name for the series.

A collection of poems cannot be read at one go. One needs to go back and read the verses several times to absorb the essence of the poetry. There are many such verses in “Ruminations” that made me stop and go back and forth, to revel in their beauty. I cannot quote them all, but I wish to quote some lines here that had me reading them again and again.

“Come!
Rediscover the ancient in you!
Sink deep into your own being
and rise above differences
that evolutions bring
What will speak is a deep silence
that is of the universe, the origin
The sound of this silence
from the core of the earth,
would rise
Nature would pause in awe
Powerful notes would resonate
and you
one with the cosmic harmony
would pulsate in blissful breathlessness” (The Mote of the Matter, p18)

It’s the simplicity of the above verse that helps it carry the intensity and depth of its meaning so gracefully. The poem “Love, Lessoned” has a narrative which is a fitting conclusion to the poem.

“I had reached the summit but not the journey’s end. The wind had slept, the birds had left. The mountain was now silent.
Far below was the hushed crashing of the sea. I was falling in love with that, within me.
And within me began, a new journey.” (p24)

These lines carry a quietude within them. They are able to put a flustered mind to rest. The words actually transfer you to that place they portray. A place that you wouldn’t want to leave.

As a reader, I identify totally with the poet in the poem “Kilned in the Blaze” when he/she (for, I cannot identify who the poet is) writes:

“An untamed nomad am I
carrying the desert in my heart
To this paradisiacal garden, do I belong
or have my uninitiated feet led me to a tavern wrong?” (p25)

“Let me loosen my soil
to be moulded in your hands
Oh, divine potter
make of me a vessel from my quagmiry sands
Stomp me till I become a pot
sand me smooth
to hold life’s nectar, rooted where it stands” (The Wisdom of the Desert, p47)

The Creator has often been described as a potter and you as the pot or the clay in His hands by thinkers, philosophers and poets since time immemorial. But the ultimate surrender of the poet to the “Potter” in the above verse is effortless and uncomplicated, yet profound. Indeed, the poet does not wish to be spared from any ordeal while being shaped by His own hands.

Love has been expressed by poets, writers and artistes in infinite ways, and still the all-consuming emotion remains much unexplained. In the poem “In Love with That”, you stop short to soak up the poet’s love that is “wrapped in its own words” (p55).

In the poem “The Duality of Death”, the philosopher in the poet understands death for what it is, and anticipates, or even looks forward to, as it would seem, the “seamless progress towards eternity.” (p75)

The vividness of the poet’s imagination is at its best, in the poem “Salt Dolls”, when he/she writes,

“This salty Sea is not what we perceive
It is a cloth of Time, of Space
Woven together unto infinity!” (p80)

By quoting a few lines here and there, I fear I may be doing an injustice to all the poets (there are 45 of them). But that is not my intention. It’s just to give the readers an idea about the magic that’s been created by the camaraderie of a group of poets bound together by their passion for poetry. Anju’s finesse and dexterity as an editor in putting together, moulding and shaping the verses is perceptible in the seamless flow and reflective pauses of the poems, all of which are strung together in story-like sequences. Besides “Ruminations”, she has edited/co-edited five other anthologies. She has also published a collection of poems, “…and I Stop to Listen”.