Borders are but Lines 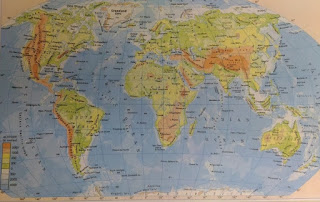 The earth, at the time of its origin, must have been just a place – just ‘one’ place – plants, creatures, land, water, and all. As humans evolved, we started drawing lines – lines of division. We divided ourselves into different lands, religions, cultures, colours, languages and whatnot. We called continents by different names and divided them into nations, states, districts, etc. The land was divided by invisible lines, with visible physical markings of course. And what’s more, we divided the waters too. We called the oceans and seas by different names.

These borders are but lines. Thanks to the human desire for power and profit, we crossed the lines, which we ourselves had drawn. We erased and defined the lines over and over again through the centuries. Somewhere along the way, we forgot we were part of the earth. We felt we were supervisors and controllers of the earth. Things had come to such a pass that we were heading for a rude awakening from our stupor. And we have. We have awakened from the stupor we had fallen into. We have woken up to find new lines of division. And this time they are not drawn by us. They are drawn by a small, tiny virus.

The continents, nations, states, and cities, and their names are not relevant anymore. The entire world is now divided into three – red, orange and green. These zones are forever variable. The lines may fade at any time and reappear in different places. Those places that were known as green could become orange or red in a matter of minutes. And that shouldn’t make any difference to most of us, as we are better off confined within our own four walls.

So also have the languages evolved. Languages are mere words to speak our minds, to communicate. Human minds across the earth are all the same. They are happy, sorrowful, angry or whatever in the same way for the same reasons. Just like the borders, the languages have also merged to form new ones. Today humans speak the same language the world over. The words they speak may be different, but they all mean the same – ‘Stay home’, ‘stay safe’, ‘stay sanitized’, etc.

We are now similar even in the way we dress. A dress is what we choose to wear to suit mainly our life, style and the climate. Today we may choose to wear different kinds of clothes, but we make sure we wear a mask too. That takes care of our appearance, colour, etc. Now, don’t we look like we belong to the same planet?

The earth has gone back to becoming just ‘one’ place after all. It took this tiny, invisible thing to bring us together. It may be tiny, but it wields a lot of power. It may be invisible, but it’s present everywhere. And the lines, or the borders, drawn are such that they vary every minute. They are in such a fluid state that we need to watch the TV every day the first thing in the morning, and several times through the day, to find out which zone we actually belong to at that specific moment. Red, orange or green?

[As published on https://indusscrolls.com/borders-are-but-lines/]
Posted by SW at 04:50

Email ThisBlogThis!Share to TwitterShare to FacebookShare to Pinterest
Labels: Articles