A loose page from a forgotten chapter 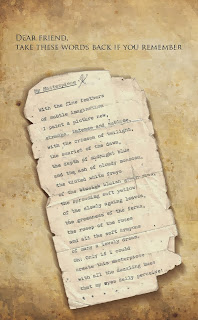 My Masterpiece is a poem I wrote about two decades ago when I was working as a copy writer in an advertising firm. As most copy writers had during those days and have still, I too had a fantastic rapport with my creative team. We were a team of dreamers, madly in love with colours, forever hungry for new ideas and always ready for the next project. One evening as we were closing for the day, my team mates challenged me to do a painting and bring it to work the next day. Though my skills with the pen were sort of slightly acceptable, I was hopeless with the brush. The poem, if one can call it that (I am reluctant to), was my weak response to their challenge. Written in a hurry and forgotten in a jiffy (or so I thought), I never expected it to emerge as an apparition on the Facebook twenty years later. It did, thanks to Rajesh, one of our team.

To me, the image brings on a sense of nostalgia – no, not because of the poem, but because of the memories of my old Underwood typewriter that had been passed on to me by my grandfather. The image brings memories of days and nights I had typed furiously away on that typewriter. Even the correction of the word ‘bluish’ on the image brings back delightful memories of days when computers were considered alien and a ‘delete’ option just did not exist. Of course, now I am thoroughly spoilt by, and greatly enslaved to, the unlimited possibilities offered by the computer.

Thank you, Rajesh, for bringing back memories of those days of boundless creativity by means of not a ‘mouse’ but pencils, pens, paint, crayons, brushes, knives and whatever else that you could get your hands on. This image reminds me of those days when you didn’t just log out to close for the day but spent about half an hour in the washroom washing off paint from your hands, hair and sometimes your nose too! And the artists’ department was not made up of cubicles, the walls of which did to you what blinkers did to horses. Artists’ room used to be a creative haven though in utter disarray, or rather, a colourful chaos.

In those days, every work we did had an interesting story behind it. And these stories cemented the team bond. Perhaps this piece of paper is testimony to the bond – and the copies of our numerous works and other bits and pieces that I have still treasured in my safety locker!

For those who would like to read a more legible version:

With the fine feathers
of subtle imagination
I paint a picture new,
strange, intense and sublime,
with the crimson of twilight,
the scarlet of the dawn,
the depth of midnight blue
and the ash of cloudy monsoon,
the tinted white frays
of the bluish green seas,
the spreading soft yellow
of the slowly ageing leaves,
the greenness of the ferns,
the roses of the roses
and all the soft crayons
of many a lovely dream.
Oh! Only if I could
create this masterpiece
with all the dazzling hues
that my eyes daily perceive!